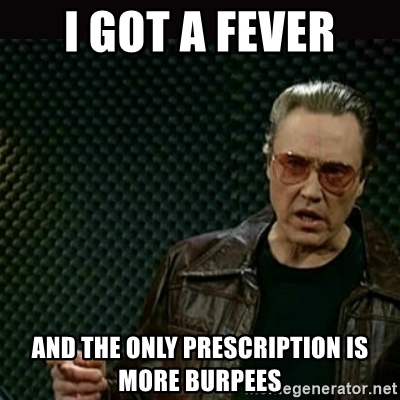 YHC mumbled his words for the first exercise which was to do twenty burpees OYO or otherwise known as a slaughter start (YHC’s brain said twenty but ten came out). Before we started, it was explained that YHC has been doing a 2,000 burpee challenge this month for Stop Soldier Suicide. According to their website, we lose more than 20 veterans every day to suicide which is unacceptable and is why this organization, SSS, was created. Once YHC explained this, we all did 20 burpees.

Arms were to stay up for the next four exercises:

YHC borrowed from DBA’s recent Q which was a simple mosey around the lake with a few stops and only a couple burpees every now and then. Quick sip of water and off to the lake path near the dock.

While moseying around the lake PAX did 3 Burpees for every set of trees passed.

After reaching the first gate, all PAX did LBC’s until the six arrived. All PAX did one set of Aiken Legs (10 squats, 10 Bobby Hurleys, 10 Lunges Easy Way, 10 Bonnie Blairs Easy Way).

Mosey/burpee to the next gate where all PAX did Big Boy Situps until the six arrived. All PAX did one set of SHEHATEME (10 Lunges Easy Way, 10 Groiners, 10 Merkins).

Mosey/burpee to the bridge where all PAX did SSH until the six arrived. All PAX did one set of Bruce Lees but only 10 reps per exercise.

Mosey/burpee over the bridge and to the next gate where all PAX did squats until the six arrived. All PAX did 5 kraken burpees (because what’s the harm in doing 5 additional burpees). Exicon states it is a Burpee that is performed with 3 hand-release Merkins at the bottom… As in “Release the Kraken”.

Mosey/burpee all the way to the dock where the first PAX in chose the exercise until the six arrived. YHC is not sure who arrived first but got there to see 6 PAX on the boat dock doing Monkey Humpers. Thankfully we did not need the life preserver on the dock.

Once the six arrived, we all moseyed back to the court with one minute to spare so time for a circle burp. We got about 5 rounds before time ran out.

Great job by all PAX today.

YHC only had 100 burpees left to complete the challenge. With the 20 burpees at the start, 5 kraken burpees, 5 rounds of circle burp, and approximately 45 sets of trees (135 burpees), we each completed 165 burpees on the day. That’s 2,640 burpees completed by the group. Thanks to all PAX for the help in completing the challenge and we won’t be surprised if some of the sets of trees have an unfortunate “accident”.

Prayers to those PAX DR or recovering from injuries/illness.