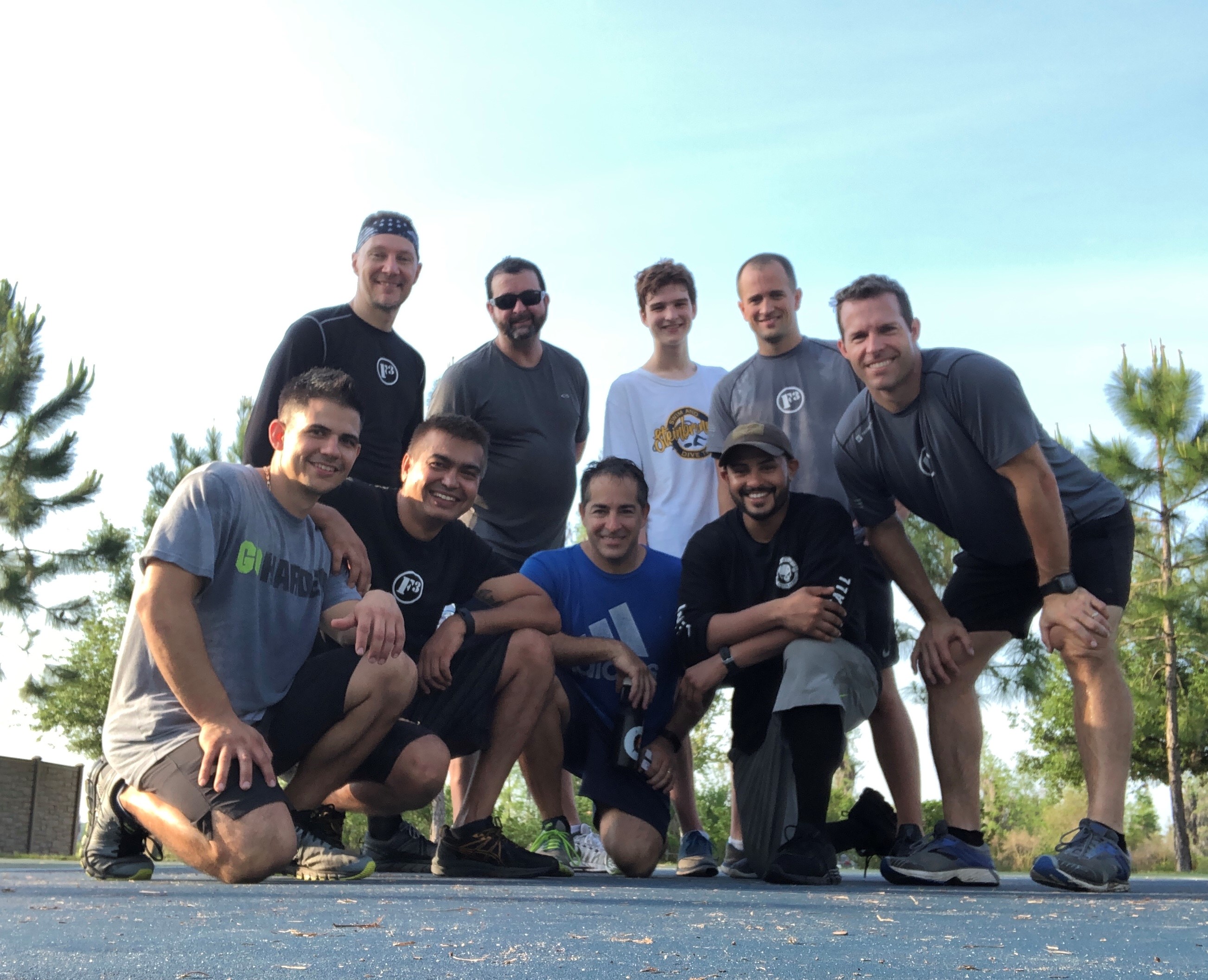 Downright beautiful gloom here at #TheRanch and very much so a gloom as this BB will encompass the hour long pre-beatdown Ruck with PT coordinated by YHC and Grouper.  7 total pax posted at 6:30 for the following:

10 American Hammers (with Ruck in front)

100 Merkins (with ruck sacks on so some extra credit there)

At this point it was around 7:20 am and Belding & Malware rolled in for presumably the regular beatdown….hhhmmmmm.  Somehow, a “mini-beatdown” was all of a sudden put together by the likes of DBA and the rest of The L7 Weenies.  Therefore, another 150 LBC’s were done between 7:23 and 7:26 am which can “legally” be added to the Triple Point totals.

[Deep breath]…………..Now, on to the main beatdown where YHC had a great deal of fun planned and the pax didn’t disappoint and showed up in great numbers.  9 pax on hand and all put in hard work!!!

Disclaimer given and right to the action!

Mosey to Roundabout towards Sunlake and after one lap around it circle up.

Time for 21’s with 5 Burpees as the penalty.  Pax did great the very first round but YHC had to be critical since it was the first round.  Malware just a tad off on the 21st SSH.

Now mosey back to courts for a quick water break and then on to the FOP.

-Team No consisted of No-Ski, Grouper, DBA and Sanka

Name something many people do just once a week?

R: Sprint to Monkey Bars and back.

Name a reason a person might wake up at 2:00 in the morning?

How much do you tip for good service?

Name a country that speaks Spanish?

What is most stressful thing in the life of a 25 year old woman?

R: Run around playground and back.

Name a character from Game of Thrones,

Name a fruit you might eat in the morning?

R: Sprint to Monkey Bars and back.

Name a reason you might be late for work?

Name something you never leave home without?

Name something you eat that might roll away if you drop it on the floor?

R: Run from sidewalk to sidewalk and back to start.

How long does a typical New Years resolution last?

R: Sprint to Far corner and back

*This was somewhat of a back and forth affair with Team Flat taking an early lead but Team No getting a few wins in there.  Lots of fun had and yes, YHC did plenty of burpees and PT as well.  YHC went with losers the first half and then winners the 2nd half of the game.

Back to the courts to finish off some Merkins & LBC’s for the April Challenge.  Team Flat not happy when they found out they had to mosey around the dog park while Team No got in more Merkins to get back even with Team Flat.

When Team Flat arrived back at courts they had 20 more Merkins to do to get to 100 (Team No finished up their 100 with them).  Now……..more mosey for Team Flat while Team No catches up with their LBC’s…..sensing a theme here??

Sorry Team Flat……this is what happens when you choose a LOT of Stationery exercises during the FF game. LOL!!!

Still 10+ minutes left so YHC left the courts once more for a quick mosey to the dead end for some Mary.  Ring Around the Mary time as each Pax called out a core exercise.

Sanka – Plank for 10 second count all the way around the group until back to Sanka, where he held for what seemed like 8 minutes!

*Yes, that’s right……..the trio at the end had a little plan up their sleeve for one more full set of LBC’s towards our April challenge!!  Just over time so quick mosey back to courts for the finish and YHC said, “if ya got anything left, give it all ya got from roundabout on…..”.  Many pax tried to jump the gun but No-Ski and Vanellope outlasted the group and finished #1, #2……..lots of gas left in the men’s tanks there at the end.

-Sanka excited and happy to be back with the pax after a few weeks off for injury.

-Prayers for Haka & M and for safe travels.

-Prayers for Apnea and M.

-Pax seemed to like the change-up today of the Family Feud game and truth be told, YHC may have borrowed from The Wreck and F3 Alpha!!  It was a lot of fun but also plenty of burpees, running and sweating.

-Great mumble chatter today and on slack all week involving the April challenge that is ongoing.  No doubt it will only get more heated and come down to the end.

-Stopped at Notorious NYC’s house and did some rucking PT out front (see picture attached) during pre-beatdown.  Miss ya buddy……come back and see us when back is feeling better!

-Then headed towards Sponge Bob’s house and wouldya know…….SB just happened to be enjoying a banana out in driveway as we approached.  Even though DBA tried to entice him to join us…….Sponge Bob responded like most of us would “Dude, I just woke up!” LOL…..love ya Sponge Bob and come back out my man!