After the Q set empty for some time, YHC and Chowdah both offered to lead at The District, but on different forms. After discovering we both had signed up, Chowdah graciously allowed me to Q so that all my work writing up a whiteboard would not go to waste. With that the “Grid of Pain” was on. After a warm up, of course.

After the warm up, the Grid of Pain was presented: 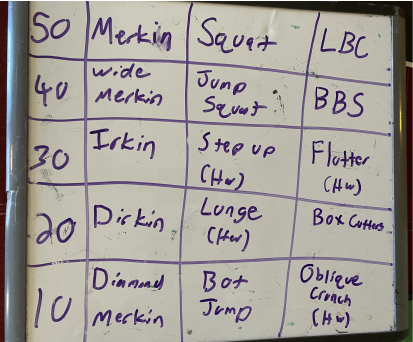 For the grid, each PAX did the exercise in the box for the reps on the left. When done, they mosey’d to the corner and back.

All PAX started with 50 merkins, then got to choose rows or columns. Meaning they could do 50 squats or 40 wide merkins for the next steps. Once they picked the direction, PAX had to stick with it till the end.

PAX who completed the grid got to start at the beginning and then had to move in the opposite direction he chose the first round.

YHC was smoked at the end and honestly forgot to do this part after the name-o-rama. After a friendly reminder from his PAX, a prayer for all PAX was held.