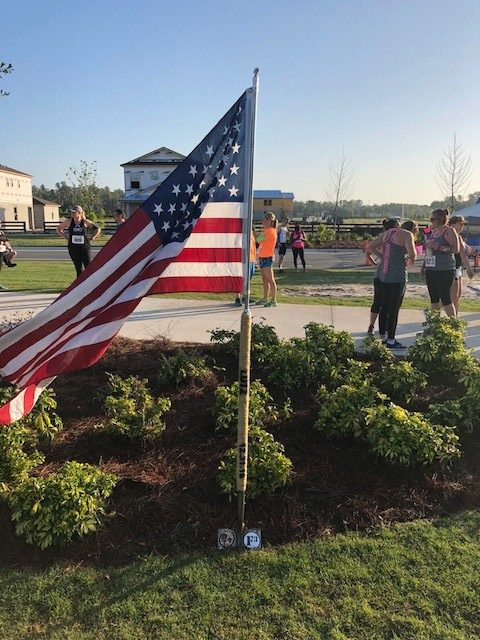 The morning was a perfect, sunny 72 degrees and 5 pax met up at Starkey Ranch for our first local CSAUP event.  Two races were going on at the Starkey Ranch Classic…..a 10K & 5K and the men of F3 Lutz chose the 5K to run and each Q had their chance to put the others through some pain stations!  (There were also 5 pax at #TheRanch getting their beatdown on with Dillio on Q so we were dividing and conquering this morning.)

After arriving at the race site, all of the pax were commenting on the awesome AO possibilities of this park at Starkey Ranch.  Two great big soccer fields, a little league baseball field, playground equipment, 4-5 pieces of workout apparatus, long trails around lakes/ponds.  And Haka even found us a pretty decent hill….more on that later!

YHC planted the flag and with about 25 minutes before start time, all pax circled up and began some warm-up exercises right out in middle of open grassy area for all the folks to see/hear.  Now for a quick mosey to the bathrooms for a potty break and then straight to start line.  Without much warning, we were off and running with the Shovel Flag in hand.

First stop was right at 4 minutes in and No-Ski had us plant the flag and drop to our sixes.  Sweat Angels, LBCs, Flutters and Boxcutters were on the menu!  NotoriousNYC seemed to be ignoring the pax for some reason…….

Off and at it again after much hootin’ & hollerin’ while the pax were doing work on the cold, wet grass of Starkey Ranch.  No-See-Um had the pax now do a little Indian Run with the back man running to front with Old Glory and then passing it backwards through each pax till arriving at the back!  Around a turn or two found No-See-Um slapping another runner’s backside for good luck…….Haka asked if every pax were to follow that lead but then quickly realized it was No-See-Um’s M!

Next stop was another 4-5 minutes in and Haka excitedly took his turn and kicked it off with 10 Burpees OYO.  Maybe some Merkins mixed in and a few other menacing exercises.  Finally, the pax started badgering NotoriusNYC about his headphones and he begrudgingly took them out……he loves his Bieber tunes when he works out!

Passing the first water station and the pax just barely diverted disasters as No-Ski dodged a little one and a mom with flag in hand……….but all was good and next up was No-See-Um with some walking lunges, squats and a little ‘human centipede’……all pax planked in a line and put feet up on shoulders of man behind and did 10 Merkins on Q’s call.

YHC was really pumped to hear all the other runners yelling for us and rooting us on as we stopped throughout race to perform various exercises and we were eager to give it back to all others as well.  No-Ski was also quick to EH while out on the trail!

Grouper took his turn and had everyone do some more Merkins, Mtn. Climbers and some others to further our sweat-fest!  30 seconds later……….Haka spots a hill in Florida and quickly calls out that he has next.  Bear Crawl half way down…..oops, switch to Crawl Bear and then at bottom stop and Sprint to top.  One more time and back off and running.

NotoriusNYC had our last stop and had us all do some more Lunges, Squats and a few other exercises that YHC cannot remember b/c the race was a good 35 minutes in!  With only 300 yards to go, we Indian Ran in to the finish passing the Flag backwards just like we started the race doing.  No-See-Um’s M got some great video of the pax finishing strong!

-Honored and proud to be a part of the CSAUP today and can’t wait to get more pax involved on the next one of these!

-Great job EH’ing after the race as many business cards were handed out to runners and lots of folks asking us questions about what F3 is and what it is all about.

-YHC also super proud of his M and 2.o’s and Grouper’s M for running as well and doing great!

-Looking forward to many FNG’s after this CSAUP at Starkey Ranch……..and who knows, there may be a venue change in the future after seeing the beautiful sights and possibilities of a new AO.