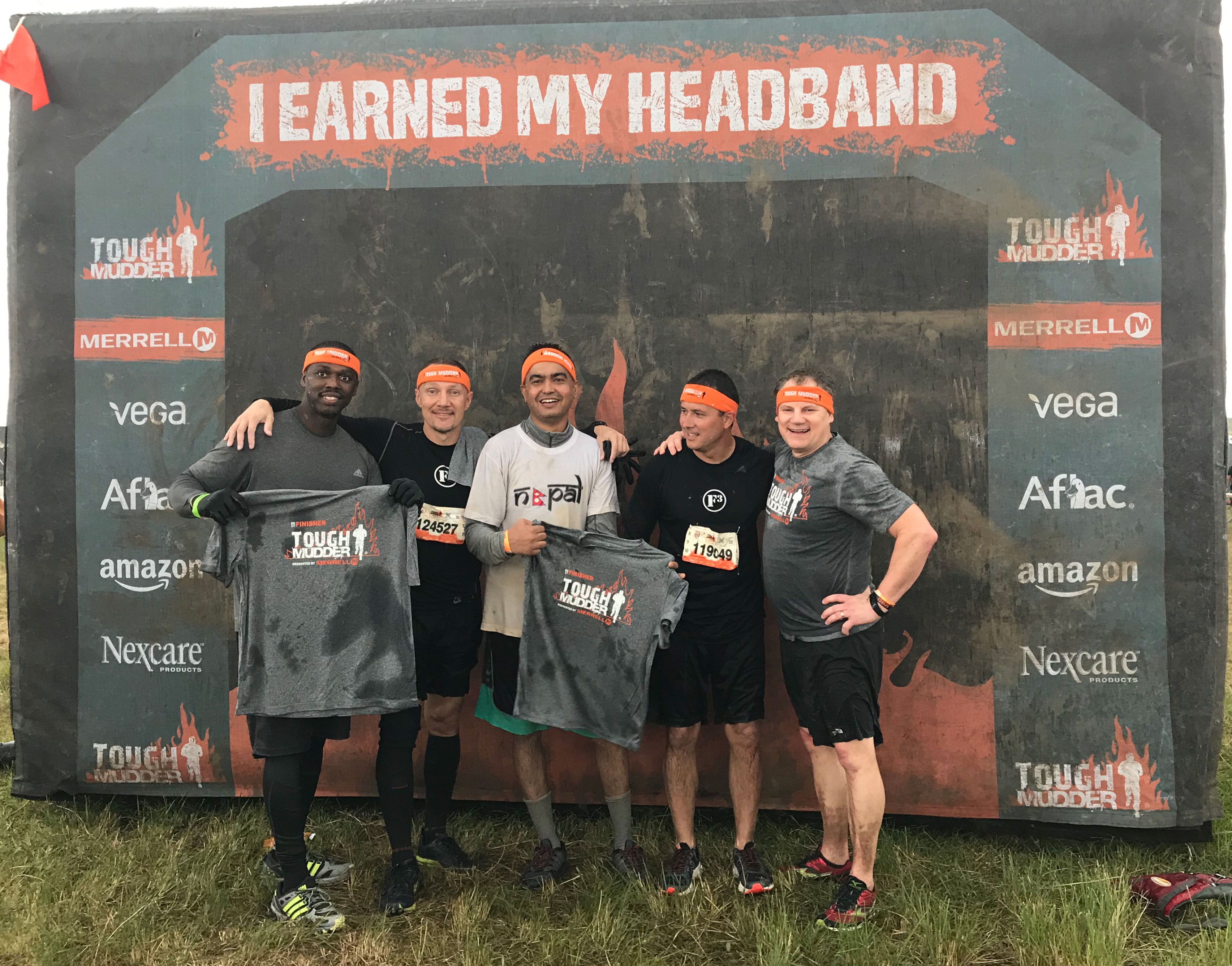 It was a glorious display of teamwork between the PAX, and the PAX helping others along the way. This was a first Tough Mudder for 4 of the 5 guys in the photo. @heisenberg did one a while back, so he kind of knew what was coming :). As we arrived on to the scene, everyone was super pumped to get started as soon as possible. Our official start time was at 11AM. The weather could not have been better. Nice overcast, with light breeze for the whole race.

We got ourselves warmed up by doing some usual F3 warmups. Little SSH, Baby Arm Circles, Mountain Climbers, some hamstring stretches and a few Merkins. While doing all of this, we all were glancing over at the ElectroShock Therapy obstacle, which happens to be the last one before the finish line. Needless to say, we all were wondering what it will feel like to run through it later on.

@dos found out we can sneak in at the 10:30AM run rather than waiting for the 11AM start. Off we went, but not before getting a quick photo in from @bartman’s M.

I can say that everyone brought their “A game” to this run. Men were really good at making sure no PAX is left behind, and we always waited for the six. The obstacles included basic army crawls through mud, climbing 10ft walls, running up a s steep incline, ice water, monkey bars/wheels, rings, plenty of water and plenty of running in between it all.

Early on @bartman got some pain in his shoulder when someone yanked his arm the wrong way on an obstacle, but this did not deter him, nor slow him down for the rest of the race. Somewhere around mile marker 8 is where some of us started cramping up with the calf muscles. Everyone fought through the pain and continued on.

After Kong (the rings obstacle) we all got together in a line to get ready to run through the dreaded ElectroShock Therapy. After yelling out a quick F3Lutz! we all went for it. YHC was so pumped that I don’t even really remember if I got shocked or not. This goes for the other PAX as well. We all made it through to the finish line in once piece!

It was time to get our headband, t-shirt and beer.

Since this race is more about teamwork and finishing the course, we did not try to do this in a neck breaking speed. Our final stats were as follows: 11.87 miles @ 3:51:19 time.

Once again I’d like to thank the above men of F3Lutz for attending this second F with YHC. I’m super proud to call you all my brothers and I am looking forward to our next CSAUP in 2018 with even more of us this time.