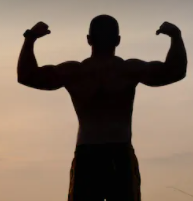 Good afternoon gents…….this is a test to see if you all are paying attention and a little something known as a “Pre-Blast” (as noted in the title).  As opposed to a “Back-Blast” which comes after the beatdown, a “Pre-Blast” comes BEFORE the Beatdown.

Oh and speaking of ‘blast’…..it’s gonna be a blast tomorrow morning #ITG so be sure to have that alarm set and kick that dragon to the curb.  Curing #SadClownSyndrome one sweat-fest at a time and it starts with the next one on the calendar which is TOMORROW men.

If you are so inclined, YHC plans to take part in a 5:00 am pre-run so if you feel up to it and aren’t too scared…..join me in the early, early gloom for some fun and festivities prior to the 5:30 am bell 🙂

It’s gonna be a great week men, so let’s start it out right tomorrow morning!

photo credit: thanks Haka for posing for me over the weekend (there’s a lot of good ones :))